Cost of Living, the second part memoir with a feminist voice and piercing words. Deborah levy, up close and personal.

Cost of Living by Deborah Levy is the second in her memoir part series after the blue book- Things I do not want to know, which by the way is phenomenal. While the blue focussed a lot on her earlier part of life and struggles, as a child and further dealing with writing struggles accompanied by low mental health the yellow book is a compilation of personal essays which talk of her later life- after marriage, her separation, kids and her thoughts as a writer working in a shed which sprouted the concepts for her books Hot Milk, first memoir and Swimming home. It also speaks of how affecting Levy’s mother’s death was. A loss she wasn’t able to recuperate from for a long time. 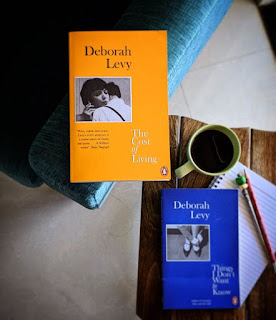 Levy’s way of authoring is not only varied but stupendous. A familiarity which lingers reminding you it’s all “her”. With her memoirs you see her writing in new light. It is different because it is welcoming and similar because solid wordplay is something her prose is never deprived of. Strongly worded yet showing her vulnerability in tough times and solitude. Cost of Living shows Levy’s fans the correlation of her book projects with her life stories. It is endearing and impressive. Her feminist thoughts propagate well through her skilfully framed sentences. I personally loved those parts where she hammers men who call their wife as just “wife” as if they have no names and only this identity to carry. “My wife”- they’d say! Her bothersome past as a young girl comes back to us in this yellow book in the form of memories, of her own and her mother's. I enjoyed the author and book references she brings up in her conversation with us, citing them and fitting them in the most appropriate stanza.

While I might not recommend this as a first book to be read by her, it is nothing short of being declared as a delectable piece worth savouring. Pick it up after you have absorbed her other works(atleast 2) so the after taste of the yellow remains longer and stronger.