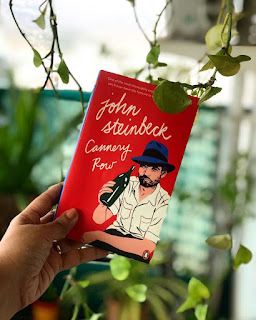 Cannery Row by John Steinbeck is said to be his ode to California, the state he spent a memorable amount of time in. And his nostalgia brims in the first few pages where he describes Cannery row, an atmospheric one at that. With his appeasing words he makes it so easy for the reader to visualise this street lined with sardines canneries, the characters and their state of mind;

The book takes us to Cannery Row, a small and close-knit community like place where some fellas(Mack and others) plan to give the doctor (Doc) a party as he is a very humble and good person at heart. This party transpires into a big fiasco gradually and the series of events that lead to it being so can be described as mishaps and comedy of errors. In his very captivating manner, Steinbeck not only frames a brilliant story around the Great Depression-era but highlights human nature eloquently. Some very wise words hidden in the form of dialogues amidst a conversation are a clever way of putting substantial content across. The writing is very crisp, ambient and engaging. Interesting characters and situations peppered with wit make this slim novel very flavorsome.
A sliver of his writing below: (my most favourite excerpt from Cannery Row by John Steinbeck)

“It has always seemed strange to me”, said Doc. The things we admire in men, kindness and generosity, openness, honesty, understanding and feeling are the concomitant of failure in our system. And those traits we detest, sharpness, greed, acquisitiveness, meanness, egotism and self-interest are the traits of success. And while men admire the quality of the first they love the produce of the second.”

In 2020 I plan to read books by Steinbeck, majorly the known one’s. Cannery Row proved to be a good start for this journey. Looking at Of mice and men next.

Email ThisBlogThis!Share to TwitterShare to FacebookShare to Pinterest
Labels: Classics