Book review of The Testaments by Margaret Atwood

The Testaments by Margaret Atwood is the one lovers of The Handmaid’s tale (THT)were waiting for with high anticipation. The high adrenaline rush of seeing Gilead once again in its darkest form and meeting Offred because getting in her mind is like framing thoughts of your own. Did it deliver for its fans?It left us with a broken heart, making the wait for it disputable. 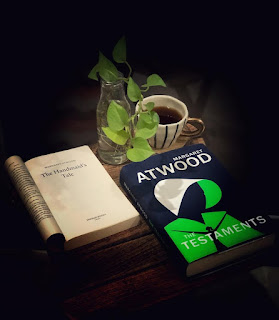 The Testaments has been called the sequel of its predecessor but looking upon closely it reflects two sides-prequel and sequel.The three narratives in the book bring forth more of Gilead for us, the strongest being that of Aunt Lydia which oscillates between past (prequel glimpses); for when she first got associated with Gilead and present where she calls herself a survivor and plans her insurgent moves in this dark hole. Her authoritative self still intact in her speech, her tight lipped smile, her convincing and sharp personality but with a hint of subtlety this time. It was interesting to read her POV, new and similar together. The other two narratives are of two young girls after a long gap where THT ends-Agnes and Daisy(the sequel look).Agnes has been brought up on the virtues of Gilead and Daisy is an outsider who is brought in. But for me, it was a leap episode with traumatic flashbacks and rectifying present. Having talked of narratives brings me to the most important part of the book- the writing and the presentation.


Because it oscillates between 3 people, the penmanship is poles apart. While Aunt Lydia’s looks fair and justified it is the other two that prove to be non-compelling. The shifting state of mind through our protagonists makes the book look fragmented with no binding motive. Traversing the Testaments I couldn’t help compare it with The Handmaid's Tale where the prose was like a coherent beam, streamlined because we saw Gilead through Offred’s mind. The open ended conclusion of the latter beats the predictable ending hands down. I wanted to be left brainstormed and exhausted, the time I was after having been with Offred; instead I was left non-satiated with floating question marks around me.

After a certain point of time reading through The Testaments was a duty to tick all pages as read because it gave you a feeling of deja vu, something you know is coming. Having watched the series too, I put all my efforts to join dots and imagine what it would have been like if certain cues from the series itself were incorporated in the book. The Testaments looks more like a sequel to the series than to its book predecessor.

A debatable fact sprouts up when we think of this book authored in a massive gap of 35 years by Atwood, but does it justify the write-up, plot and overall structure of the book? No. Not in the truest form.

I would still ask the lovers of The Handmaid's Tale to read it, the demarcation in both these books is clear as a crystal.

Thank you to the publisher Penguin India and Vivek Tejuja's blogger program for the review copy.
- October 23, 2019 3 comments: Links to this post