Every time I enter her territory, it is with a clean slate.Knowing her writing flair and her presentation capabilities I take pride in knowing her work before I delve into her book only to be proven wrong.Each time! And it is the only time I don’t feel berated of having been done so.This blue beauty just left me with a gaping sigh of relief, which came from the awe of reading it. 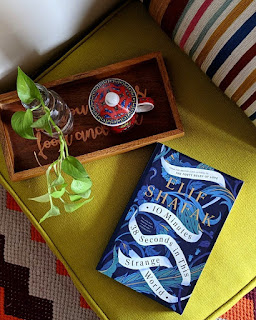 It begins with The End,the story of “Tequila”Leila-a prostitute.Reels and snippets of life run in her active brain for the last 10 minutes and 38 seconds before she would be found dead and eventually buried.Her memories traverse from her childhood to the day she left home to arrive in Istanbul.Reading about Leila’s strenuous childhood was accompanied by excruciating bouts of anger and distress. She continues to think about the brothel street,her friends and love, found and lost.Each phase of her life is associated with a flavour or an aroma.The author presents the book seamlessly recording the thought going on in Leila’s mind at every minute introducing us to characters which are broken, flawed and yet adept of piercing us with their persona.

The book is divided into three parts:The Mind- which has Leila’s closest thoughts,some which she says out loud and some which she keeps for her own musings. A very strong character and one that you will remember for a long time.


The Body-which decides she should be buried in the cemetery of companion-less. It was upsetting to know this exists in real. People who have no family to perform a funeral are buried here, as the name says- "companion-less". What is really debatable is why should Leila be buried here. She has friends like family and she isn't alone or abandoned. Her friends take it in their stride to move Leila's body from this cemetery and burying her with the respect she deserves. What follows is the hassle accompanied by some light moments her friends have together. I loved how the human relationships have been explored in the book. Not tied by blood but similar situations in a city which has silenced them speaks volumes about Shafak's dexterity in giving them a voice and a reason to be heard. Leila being the prime character was present through out the book; before and after her death in their thoughts, actions, prayers and the slightest thing which would begin by -"If Leila heard that.." and trail off with a sigh which showed how much her presence was missed. I highlight this to say that though we see Leila's five friends in action after the first half, her aura remains.


Lastly, The Soul-which sees her free in her spirits, just like she always wanted to be.

With its poignant and beautiful writing it talks of eternal friendships and identity crisis in a multi-faced city like Istanbul,one which is caught in political rift.For once I saw how moroseness can be encapsulated in words of solace and solidity.Not only is the author a brilliant storyteller with a writing finesse, she drafts her characters with a weight which isn’t easy to shake off.It is their verve, fervour and will which catches immediate attention.


It was everything I wanted Shafak’s next to be and everything which I couldn’t fathom.