For a year this book was on my to-be-read stack.Every time I saw someone praising it on the net was the time I’d say myself-next month for sure.The excitement had built up and I’d often imagine what it’d be like when I finally read it.The fear came along; what if I don’t like it much just as everyone else.But,the happiness of reading this beauty was extraordinary.It was like opening a can of soda after it has been shook,the bottled emotions bubbling out subsiding eventually.

It is the story of Ifemelu and Obinze and how they strive to keep their love alive even after being separated geographically.Ifem moves to New York for her studies as the conditions in her home country Nigeria become politically grave.While Obinze,nurturing his dream of going to America never makes it there and deals with his own set of challenges until he settles down in Nigeria.What is it that the future holds for both of them? This might look like a very stereotyped love story,but it is not. What makes it special is Adichie’s craftsmanship to sew a book which talks about race,immigrants, challenges when you are a Non-American Black,hopes and finding roots simultaneously focusing on people which remind you of home and which define “love”. 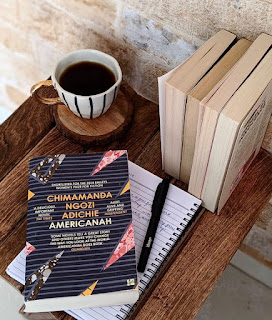 Americanah speaks of race like no other. With abundance knowledge it pulls a satire and explains what black immigrants go through when they first move to US. It was appalling to know that hair could be such a major racial issue.I always thought hair was hair,is it not how it must be looked at?The blogs Ifem writes,about such differences were eye opening and entertaining,together.The book talks of black-stratum not only in the US but UK too.They appear parallelly co-incident.
I was amazed at the propensity with which the words came hitting.I welled up to them sometimes, they made me smile and often cracked me up.The part which describes Obama’s win as the US President emancipated the hopes with which people had clinged to him.I got so emotionally bound to those words that after ages a book found me tearing up.It brought me the memory of his winning speech which I saw on the television.It gave me the goose bumps again.

Not only does Adichie write with gravity,it is her characters that carry a similar persona.I admired the way Ifem voiced out her thoughts.I wished to be blunt like her. I loved how Obinze was so placate in his demeanour.They aren’t flawless characters but that is why I love them more. This is a must read book to explore Adichie’s power of transporting you with her words and placing you in the characters shoes, to admire her writing prowess and to know the factual importance of race when it comes from one of the most developed countries in the world.My mind lingered on to this book for days refusing to leave me.I was able to write only when the cognizant waves calmed down after hitting the shore.

Must must must read!