Deborah Levy had me floored with her first of the three part memoir in writing and womanhood. The more I say,the less it would mean.I found myself flipping back to my favourite parts once I had finished the book,they were so impactful. It is incredibly well written.Levy’s word play was what I enjoyed the most.It passed across a powerful message leaving the reader astounded with her capability to keep her content light and fierce at the same time.

This little work of perfection(for me) is said to be the response to George Orwell’s “Why I write”,a 1946 essay.Levy picks her chapter headings from Orwell’s book which he says are categories of writing and are found in varying degrees amongst writers.She elaborates on them in her own magnificent way.While Orwell’s style is more serious and piercing her’s pierces us in a more joyous manner.This mini-memoir or essay by Levy oscillates between three countries-Majorca,South Africa and England.She talks about voicing out,her depression(without naming it),feminism and writing as a whole with such ease, gravity and entertainment,together.Not only do I recommend this to budding writers but to everyone who have a knack for good prose and insightfulness. Reading “Why I write” would prove to be only better before picking up Levy but this blue book sure is a powerful standalone. Reading both would just enhance your perspective towards both these stupendous writers. Re-iterating,this one just left me amazed by the propensity of words, writing, style, content and motive. 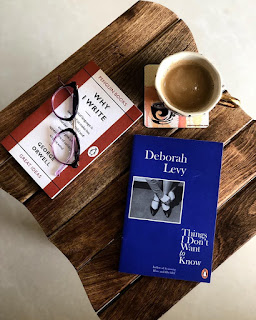 Putting down the last para from the book which I loved and she nails:


“That spring in Majorca, when life was hard and I simply could not see where there was to get to,it occurred to me that where I had to get to was the socket.Even more useful to a writer than a room of her own is an extension lead and a variety of adaptors for Europe,Asia and Africa.”

It had all the things I wanted to know about my new found favourite author. Whole heartedly recommend. I am reading the “yellow” part of the memoir- "Cost of Living" soon.