All the Lives we never lived by Anuradha Roy- How it left me with questions unanswered.

The anxiety and happiness of reading a new author is an expression beyond words. And when it comes down to reading Indian authors I always have my third eye open, analysing it more like a critique than a reader. The reason is quite simple. Indian literature and books are out there in abundance, while some authors are underrated, some are overtly overrated which disappoints me, that as a reader are we doing enough to really look out and vouch for the ones who are really deserving? It was my first book from the author- Anuradha Roy and she leaved no stone unturned to impress, yet I was looking for some answers which I didn’t find. 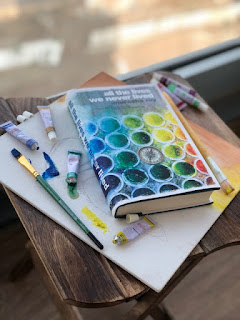 The book is framed in the times of pre-independent India. It is primarily a story of a young boy Myshkin and his mother Gayatri Rozario. They reside in a small town called Muntazir with Nek, Myshkin’s father and dada, his grandfather who is a doctor. Being set in a backdrop of pre-independence a lot of activities appear to be conservative and staunch. For instance, the women were not given the pass of free will to pursue their wishes. The leaders being shoved to jail for talking independence, every foreigner being looked with a questioning eye and an era where art and music were given subdued importance. Gayatri often felt trapped in her own home because her passion towards painting was looked down upon by her own husband. She felt as if she wasn’t even allowed to reveal her imaginations to herself. Their never ending arguments, Nek’s and Gay’s, on right and wrong filled their dinner table and Myshkin’s head with ideas they didn’t even realise they were directing towards him. While Nek always tried to impart wisdom regarding the importance of freedom for the country and his due participation in the same, Gay always opposed him over the same. One day, Gayatri befriends Walter Spies and beryl who come looking for her in their small town. She feels happy to share her thoughts about both of them on art, culture, dance and music. It is as if being with like-minded people. Nek opposes her meets with them saying neighbours have started pointing fingers because of these low activities going on in the house. Unable to bear the burden of always being judged she escapes her responsibilities and leaves her son for a life which is waiting for her in Bali. What follows ahead are the repercussions of the movement and war which took place before India was declared independent, and how Myshkin’s and the family’s life moves on in the absence of Gayatri Rozario.

I loved the fact that how efficiently the plot and the characters gel up. It is like even if one character was amiss the story would have fallen apart. The distinct characters not only provide a firm base for the story to move on but also gives a different angle to the plot with every character holding a prime position in the book. The story covers all aspects of the family members with different opinions narrated in Myshkin’s voice. It is woven around the relationship of a mother and a son, but not missing out on the fact that Gayatri is also a woman of dreams. The sync between Myshkin’s thoughts and how the story moves on has been very well defined. Also commendable is the way in which Gayatri’s imaginations have been put forth once she dives in her world of paintings. I could really connect to them having been a painter once myself.

There were some things which bothered me too. When Gayatri Rozario decides to step out of the house is the time when the readers mind is full of questions. The answers are gradually answered in her letters which she writes to Liz describing her day, her work, her challenges and the beauty of the place where she now stays also mentioning her love for her son and how desperately she misses him and wants to bring him to her. While, Gayatri’s side was clearing up through her letters I was really more interested to read Myskin’s thoughts which felt too little considering a small boy whose mother left him and ran away. What would be his plight? There are certain places where his anger shows up but momentarily, the next day he is dreaming about being where his mother is. And, even after the years pass and he finally reads the letters where a lot is revealed about Gayatri’s identity and life unknown to anyone, he is found putting up an understanding approach; which somehow didn’t appeal to me. After most of the second half, Gayatri’s letters look dragging and I was more interested in knowing Myshkin’s front because I felt like a lot of my questions were still hanging dry, unanswered. 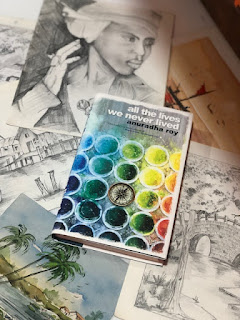 The writing is pretence free, sensitive and thoughtful elaborating the environment outside Myshkin’s house and inside as well. The book has been put together considering characters, plot and theme. But what it leaves behind is giving the reader a satisfied feeling at the end, which is very important for a good book to do. I would recommend this book because Anuradha Roy is one of those Indian authors whose work mustn’t be ignored.

I read this book as a part of a read along in the reader community on Instagram. It was interesting to know varied comments on the book, also resonating on some similar points. The experience was a really good one. Discussions and read along’s like these give more insight towards a book, because as they say more pair of eyes are better than a single.
- June 12, 2018