My tryst with Murakami started when I first read his short stories online, a few years back. I remember the impact they had on me, I was hungover for a long time thinking about the story, the writing, the presentation and the ecstatic “Murakami” art that he uses to weave his content. I was floored. Fortunately, I have a reader sibling, my younger sister who shares the same passion and love for Murakami as I do. Guess, that’s one thing common between us! <wink>

Men without Women is a collection of short stories crafted impeccably to always leave your mind in a contemplative mode. Well, Murakami is very much known for its open ended conclusions leaving the reader to figure out the rest. I might be iterating this but it’s so true, writing a short story is a skill because to gauge a readers interest for a particular frame of time and conveying something strong and beautiful needs to be done adroitly. And if they impress you, you will love them all your life and if they don’t you will shy away from picking a book which is a collection of short stories. 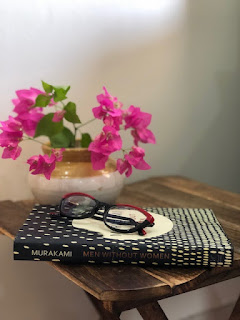 As the name suggests, Men Without Women; it contains stories where men live a life minus the women they love and the women who impacted their lives and left unsaid. I will start by telling you about my absolute favourite story from the lot. It was ‘Kino’. It talks about a man whose wife cheats on him with his best friend and they separate. Kino, without raising a question or a fight leaves their house and starts a bar of his own. He thinks he has started anew leaving the past. But, has the past left him? His demons start calling out for him and he is petrified at the thought of facing them, as he has been avoiding them from far too long. It is written brilliantly with the prefect suspense that will not let you put it down. I couldn’t close the book until I had read it whole, even though there was a toddler gnawing at my foot. The next favourite was the story itself- ‘Men without Women’. The best kept for the last. Quoting from the book- “Once you have become Men without Women loneliness seeps down inside your body like a red wine stain on a pastel carpet”. There are many more which are worth quoting from this story. This one elaborates on the feelings of a Man, speaking on behalf of the male community on what it is like and how they become men without women. The portrayal of these feelings is so profound. While, ‘Drive My Car’ brought out the insecurity of a married man with a dead cheating wife, ‘Scheherazade’ is all about a sense of contentment in a woman who sought pleasure in breaking-in to his school crush’s house and nipping at his things in his room. ‘Yesterday’ talks about two people discussing an event of their life when they bump into each other, reminiscing a memory. And talking about it makes them feel like it was just yesterday that all of it happened. ‘An Independent organ’ speaks volumes about a loner man discovering his identity after falling in love with a woman who leaves him to die a slow death. Lastly, ‘Samsa in love’ is about the idiom- ‘beauty lies in the eyes of the beholder’ or love doesn’t need to be perfect, it just needs to be felt, both ways.

Murakami’s style of writing is very different from a lot authors. He never gives out anything out rightly. The use of the metaphors, idioms and the layering that he does to magnify his script grabs a reader’s attention immersing him in his work. He lays the groundwork that good, for you to transport in a world he is weaving. And majorly, he has the knack of putting open endings brilliantly that they do not look bizarre. He creates masterpieces is what I can sum up for his work.

Reading a Murakami comes with a disclaimer:
A lot of readers do not connect to Murakami’s work because of some reasons I mentioned before like the open ended conclusions. And I don’t blame them for it. Murakami is not everyone’s cup of tea. Like I said before, his writing is a lot different from many authors that we read today. It will only gauge your interest if you understand what is hidden in the coats of his words. My only suggestion to first time Murakami readers would be to start with short stories which are available over the internet easily. Only if you enjoy them is when you should start picking up the complete books like Kafka on the Shore or the Norwegian Wood. What it might otherwise do is make you form your views for this brilliant writer in a not so positive manner.

Some books are just to be read and enjoyed, because sometimes you might not find the right words to describe them completely. Men without Women is one such book.