As an Indian, it gives me immense pleasure to take pride in Indian literature. Be it then, in any language because Unity in diversity is what India has always stood for. And, it is so good that translated literature has come into existence, it not only exposes us to a variant platform to read but also imbibes the cultural aspect in oneself. One such novel is Ghachar Ghochar and discovering it was just fabulous. Right now it sits at the top of my Favourite books by Indian authors pile.

The story starts with narrator contemplating and trying to find words to talk to this waiter named Vincent, who works at an old but very famous coffee house. He is an oracular person who speaks with such analogy that he is able to answer the questioning mind of the person he is speaking to. The narrator’s tryst with the coffee house and Vincent is an old one and he still maintains it. He starts reminiscing about his life starting from the phase where every penny was to be looked after. He takes us through the day to day life of their family, how the day would wear on, what his Appa did for his living and how chikappa took over the family responsibilities after his Appa lost his job. He talks about the power they handed over to Chikappa and never questioned it even once, for it was an unsaid thing in their family. But Anita, narrator’s wife is not a person to watch silently and keep mum over the incredulous surroundings she is living in. And what does fate and this family have in store for her because of her out rightly spoken nature? 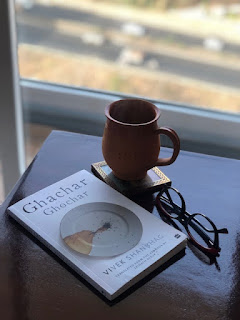 It is a short book of exactly 115 pages with simple yet beautiful writing conveying something as strong as feminist views, the misuse of power which one takes for granted now that they are rich without calculating the time when they were once among those people living in small houses infested with ants, the silence of the family mostly men, when an innocent female is ill-treated for no good reason and finally considering yourself rightful to take someone’s life. Just like Vincent says, “Blood is thicker than water, Sir”. This family for sure sticks to this idiom.

I loved how without bragging or stretching the content, powerful words were put through. The characters are strong which the plot required and the description about each one of them helps you picture the scenarios perfectly. The character called Vincent is to look out for, his idioms have been made to co-relate the story effortlessly well. With such an intriguing book title, discovering what it actually means is like achieving the idyllic state of contentment. Vivek Shanbhag has written this miniature thing dexterously and has taken Indian writing to yet another level of poise. I cannot praise it enough.

It’s a reader’s delight!! It’s a Must Must Read, absolutely!