I take book recommendations very seriously, and when they are from the avid readers who I follow, it’s a set rule that I have to get those books. The forty rules of Love by Elif Shafak was one such reference which came in from a book club that I am a part of. And, the decision to pick it up for Femme March fest was just brilliant. Pat on my back! To read an author whose work makes you think deeply and love more freely is a book worth cherishing.

The Forty rules of love is a mystic story of love, with more than one narratives and showcasing a character driven point of view about a man, Shams who is a Sufi is so much filled with love that emotions like hatred, jealousy and anger cannot even wander near him. He has so much knowledge about love and life that he is full with it and now needs a companion to share it with and transfer his share of wisdom. On his quest to find his companion he meets different people who see him with judged eyes, question his being and challenge his Sufi insight. He also meets people who he has been noble to, and they have seen nothing of him but kindness and compassion. But, when he does find his confidante, animosity against him is in full throttle for his better half is no one but Rumi, the great. Though at that time he wasn’t a poet but a philosopher and a preacher. He preached so well that people from all walks of life use to come to hear him in the mosque of Konya, the city where Shams meets Rumi. Aware that how all this going to end, Shams allows himself to completely immerse himself in his present life which only revolves around Rumi. 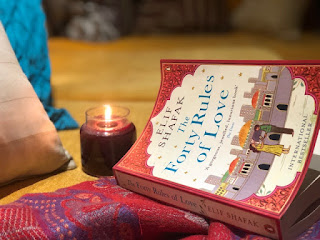 Shams is one of those literary characters who are bound to be favourites. His portrayal is compassionate, fair and fearless. He will not bat an eyelid before saying the truth, no matter if it shows him as a brusque individual; his satirical nature to people who term themselves learned of love and God but in reality know nothing except the surficial truth made up by themselves; his unbiased love towards a leper, a prostitute and a drunkard is all the same. And above all, he lives by his forty rules of love which he talks about intermittently in the book. Shams’ rules are like jewels for life. They are easy to remember, to implement and to take notice of in our day to day life.

The writing is a sublime combination of two world’s put adroitly; the world which we live in and the world which was Rumi’s. It is admirable and pristine, just what you need to set the tone of the book right. It flawlessly transports you in two eras – we read about Ella’s love lost situation and then a point of view from one of the characters which is totally in sync with Ella’s thoughts. The book flows in a smooth way nowhere giving a feeling of lost touch or loopholes. The characters are perfectly placed and the POV’s of all of them make sense and elaborate more on Shams’ character and his philosophy, each character reciting one of the forty rules which they adhere to. The rules have not been written with respect to a time in history, in fact they are timeless classics and penned down in a very customary way. I mention this because a lot of readers may feel that because it talks about Sufism and love of God and self at a mystic level, the inscription would be heavy and seem historical. However, that is what is so impressive about the writing. It is relatable to an extent of being understood and relished. It impacted me so much that I dreamt of Shams while reading the book and after finishing contemplated his rules in my mind various times. I do it even today when I weigh a state of my life in my mind.

Why should one read it?
One should pick this up because not only does it give up so much on Sufi culture but it reminds us of the love we have forgotten in the hustle and bustle of life, it talks about the God we sometimes fear and sometimes curse for its only love that will get us closer to him, it speaks volumes about what you sow, so shall you reap and so let’s just reap kindness and affection. Once in a while, picking up something to read that calms your mind and soul simultaneously questioning a lot of things around is not a bad idea at all. And, when the book is written so dreamily, you are definitely in for a treat.
- April 12, 2018