When the month of March is here, we know what is around the corner, Women’s day. It celebrates womenfolk in each and every form. And so, the bookstagram wave was all set to celebrate womanhood in the female writers who have given us impeccable books to read and rejoice. #FemmeMarch was originally started by Resh Susan, very famously known as @thebooksatchel and taking it forward this time with the hashtag #femmemarchfest was Aritri Chatterji aka @theliquidsunset. I really appreciate them for coming up with this initiative because not only does it make us bow to some amazing writers and their work but somehow it also liberates a woman reading a woman.
Readathon for #femmemarch was a very pleased experience for me. In this last one year I stepped in to a role of mother from wife, as overwhelming as it was, it was also emotionally challenging with a lot of changes taking place in and around. I would not be able to read as much as I liked, but ironically when I did were the moments of peace and self-care for me, feeling satisfied for whatever little time I could sneak in to read my books. Therefore, after a year I took Femme March as a challenge to test myself with reading under set targets and Time. It was all about getting back to my original reading speed, increasing the amount of reading the number of pages in one sitting etcetera. And very thankfully I can say, that I delivered what I thought I wanted to deliver. I made a comeback with an improvised version of myself, which was very redeeming. 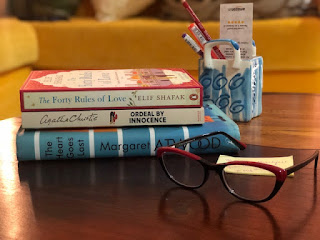 My picks for Femme March fest:
I chose three completely different themed books. Although, now when I look back I think I could have squeezed in one more. The writing of these authors were so varied, completely different from one another but totally impressive. Penning down the mini reviews for the books below:

Ordeal By Innocence – Agatha Christie
There isn’t no book lover who is not a Christie fan. We have read her as children and we love reading her now. She is an all-time favourite and there is no bad time to pick up a Christie book. It’s evergreen.
Book review: Just as her books always speak, a great mystery with good characters and plot building. This was no different. The story kick starts with a pace but slumps down in the middle making too many repetitions about the case. It feels like going around in loops and arriving nowhere definite. Just when the second murder takes place, it becomes really easy to spot the murderer. It is very predictable and that somehow snatches away the wow moment from the thriller. I missed Poirot! And it made me wonder had the book been different if it had Monsieur Poirot in it to solve the mystery. There is no other like him in Agatha Christie’s novels.
Verdict: Not a very wow Agatha Christie book. There are better ones to pick up. 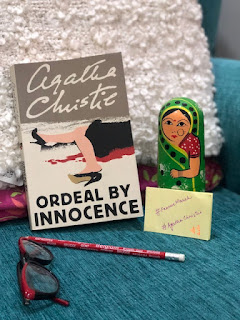 The Heart Goes last- Margaret Atwood
She is famously known for her writing with her differently abled humour. And, boy was that true! I was floored by the plot which takes time to grow up on you. But once it does, you find yourself connecting the dots yourself and anticipating the next move in the book, only it really isn’t easy to guess what’s going to happen next. It was my first book by the author and right now if I show you my Amazon cart, you will find a couple of her books added in the list. Yes, I would want to read her again.
Book review: It is a very complex story set under a near-future dystopian theme with characters pleasing as well as questioning. In fact, in the earlier part of the book you will find yourself quizzical about a lot of things which really make sense once you dig deeper in the book. That shows, it is a very well framed plot and presented astoundingly well to sustain readers interest at every level. The book is about survival of Charmaine and Stan, a test of their love and relationship. Will they come out clean after so much of turmoil in their lives is what we see when the book ends. It is dark, but it is comic too, disturbing at times and very intriguing. I enjoyed Margaret Atwood’s writing, flawless and so much in sync with her story. The heart goes last was nothing I had read before. The newness of reading something so intricately futuristic was enthralling for me.
Verdict: Pick it up only if you think you are ready to put your imagination to use, and can absorb any level of shady culture in terms of relationships, survival and reading. If I made it sound too serious may be saying that Atwood’s stark humour will save it from becoming a totally dark novel after all will be of some help. 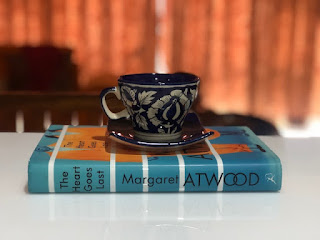 The Forty Rules of Love – Elif Shafak
I have to start by saying it’s the best thing I read in last few months, except after The subtle art of not giving a f*ck. Elif shafak writes beautifully transporting you to a time of Rumi’s and brings you back to an era which is ours. But aren’t they the same because Rumi is still with us in his classic poems? Yes, except the definition of Love in our era needs a little refining, which only Shams’ Forty rules of love can do; bring back the love we think we have lost.
Book review: Because it was my most favourite, there is a detailed book review here- The Forty Rules of Love
Verdict: Must Read! 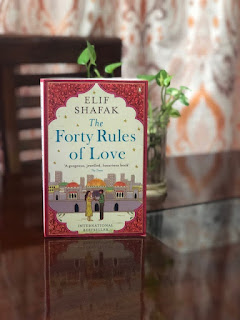 Come next Femme March, and I am ready with the word Go and my list of books! :)