It so happens a lot of times that we buy a book solely because we might have read one of the author’s best works. I ended up buying Franny and Zooey because of the same reason. I had loved J.D.Salinger's Catcher in the Rye, in fact it still remains one of my most revisited books; but my views regarding the former are quite mixed.

It is said that you come to know how the book is turning out to be after you have read the first 100 pages. Well, to be frank, this time I was blank when I completed 100 pages of the book. So, the first impression of the book was rather puzzling. The book has been created in two parts, a short story - Franny and the novella - Zooey. 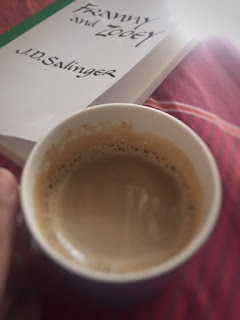 In the short story, Franny, who is troubled by the selfishness and the non-realism of the people around her meets her boyfriend for a weekend, only to pounce on him at every single thing he has to talk about. Sensing her situation as unstable, and her mannerisms uncontrollable, she tries to calm herself down by chanting a Jesus prayer, a new theology she has come to believe in.

The book apparently is about the two youngest members of a certain Glass family. How, they say that they both are freaks, and why so; where Zooey is a budding actor while Franny is going through a spiritual situation putting her whole family to worry about her as she goes starving, not-sleeping, and basically reckless about everything around her; people included. Zooey finally steps in to talk to her buddy sister about her state, after being continuously coaxed by their mother. In the heat of the discussions he says a lot too much. So, this is where the conversation part gets a little interesting. However, I found myself shifting from the hooked-zone of reading frequently, may be because intermittently it felt like blabbering.

As far as the protagonists are concerned, their characters can be described as freakish, just like they call themselves. Zooey is a talker, and eventually succeeds in convincing Franny with his sage advice. There is a mother to these children, Bessie who appears on and off with her worries for her daughter and chicken broth.

Various spiritual phenomenons have been dealt with in the book, and they are mentioned as a result of Franny's state of affairs over reciting a Jesus prayer which she learns about from a pilgrim book that she is reading. Zen Buddhism, Hindu spirituality and Jesus prayers are talked about to name a few. The last few pages make the book worth it where Zooey is talking to Franny about the faith facade. And it really impressed me what he says about pious conviction, keep spiritual faith if you have to, but do not let it leave you, your duties and responsibilities towards life. It is meaningless if you have to starve and put yourself in a miserable situation because of that.

The writing is a typical J.D. Salinger style, raw and factual. His writing style forms one of the perpetual points of selling his book to the readers. His characters are always unique. And he presents them in a very distinct manner. I might not out rightly suggest this one to read, it's not a book to fall in love in the first reading. But yes, for the likability of the author, one can surely pick this one up.
- October 03, 2017