No matter how much I despise Chetan Bhagat's last few works, it never stops me from reading him. Quite frankly, I always want to know what is behind those covers this time, always anticipating the magic of Five Point Someone and 2 States to ooze out of the book.

‘Feminism’ has become quite a loosely thrown word in recent times and people seem to have a definition of their own at times. With such prevailing precarious definitions and scenarios related to feminism, making it the base for a story is quite commendable. But, was the effort commendable enough and did it appeal is what we discover here.

The protagonist of the story is a female- Radhika Mehta. She shows enough audacity to state about herself- ‘I am not a very likeable character’. Reading something like this at a first instant makes you think of the reasons that would make her unlovable. The story starts with a wedding scene and Radhika’s wandering mind not accepting to face the reality of it. When we read through her character, we come to know of her as someone who does not believe in gender un-equality. And seeping through the cracks of her wedding panorama, in flashbacks we discover her as a nerd, a scholar, a performer at her firm, a female who wants to fall and remain in love and a feminist. That doesn’t sound so un-likeable, right? So, what is it that makes the book dip down yet again for Chetan Bhagat? 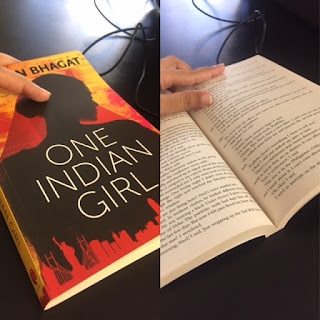 Born into a Punjabi family and hearing the nudging comments related to the patriarchal society, Radhika excels throughout her academic and professional life, until the so-called male dominant self-esteem reality dawns on her when her less- earning boyfriend leaves her saying she can never become a homely wife or a mother, when actually what a man cannot handle is his bruised ego of his girlfriend earning more than him. She fights her monsters over this and with a change of location lands up in the arms of a male who yet another time exclaims that he doesn’t see her as a ‘maternal’ figure. But does this waiver her ability and make her doubt herself or think that being ambitious could be a sin? No, it doesn’t. Does it shake up her confidence of having a successful career and a family at the same time? No, it doesn’t. Then why in the second half of the book, with the return of her exes do we seem to find her fluttery with her decisions, find her evaluating her options and that too with the men who once stood pointing a finger at her, so much so that she even disregards the one sane man who she is about to marry, burdened with her feminism facade. Her saying ‘no’ doesn’t sound promising enough until last few pages. When you hear the word feminist, apart from the sturdy definition it holds, for me it also conveys having a strong mind and non-wobbly belief about yourself. And it is this same definition that the protagonist is found negating time and again in the book. The attention seeking phenomena from both men each time throughout the book signify her dire need to be needed. And it has been written in such a generalized manner, that it might not even hold good for a lot of females who believe in a strong stature of womanhood. So yes, for me these traits did make the protagonist not-likeable. The ‘mini-me’ as Radhika says, or the conversations which she has in her head make up for most of the entertainment and a lot of times make sense too.

Before I start ranting more on the lows of the book, I have to admit and appreciate Bhagat’s writing flair. It is something which can hide major flaws sometimes- it is light, humorous, keeps you entertained and simply flows. And, by now, even he knows this too. The writing of the novel is the only thing which will keep you hooked till the end- the puns, the humor, the colloquial dialogues make it readable. As far as the plot is concerned, it is just like watching a bollywood movie, or reading the screenplay for it.

The fact that people remotely relate to what he writes works out for him. The stereotypical Punjabi wedding scenes, a loud mother and a puppet daddy are what we have read before. The newness starts fading soon once you dive in the book. One Indian Girl could have been much more than what has been written-  it could have been more about the suave, the potency and the wit an Indian woman carries to workplace, at home and socially, irrespective of the stereotypes- rather than tagging it with the word called 'Feminism' and heralding her as an icon even before the book released- that just increased the expectations from the character to behave in a more perfect way.

I‘d say- read it at your own risk. My mom finished the book some days back and the disheartened look on her face said it all. Our continuous disappointment from his works will never make us stop reading Chetan Bhagat, but it would be good to see him explode a bomb with his next one.
- October 24, 2016