Me before You- Jojo Moyes

As I have mentioned in many of my previous posts, I am not a romantic. As such, I started reading this book 'Me before You', which I knew of as one from the romantic genre, with a distant mood. But after completing it, my outlook towards the book changed. It is not only about romance or falling in love; rather it speaks volumes about life too. My viewpoint seldom remained confined to looking at it as a romantic novel; I would rather put it as a perfect combination of matured love and living your life to the fullest and what it's worth for.


The backdrop of the story is a man and a woman put together under odd circumstances, which might make falling in love look impossible at the outset.  A 27 year old woman lands up at the doors of a rich family as a caretaker of their son, Will Trayner. Louisa Clark is in dire need of the job and she doesn’t have a choice but to accept the job for the money which her family needs as she is the sole earner. Her first meeting with Will is a cold one, with exchange of hardly any words, or rather, sharp words for a first meeting. Will Trayner is a handsome man and young enough to be on a wheelchair and a C5/6 Quadriplegic. Her first few days with Will are uncanny with less talking until one day she finally hits it off with her 'Clark' nature of being blatantly true and speaking facts. That instance marks the breaking of the ice and what starts ahead is a relationship of understanding, care and cordial rapport between the two. Will’s character comes across as calm, bossy (towards Louisa Clark), with a fondness towards satirical humor and tongue-in-cheek remarks. The latter trait comes mostly because of his muted irritation towards being trapped in a chair. Louisa, on the other hand, paints an effigy of a next door woman, caring with a bizarre dressing sense, sometimes blatant but clueless about what she wants from her life. This thought bothers Will a lot, as for someone who had lived life to the fullest, how could the worth of just wasting it with time be agreeable. Therefore he constantly pushes Louisa to try out the things she always wanted to do and analyze life more with the intention of squeezing the maximum out of it. The story takes an interesting turn when Louisa discovers the secret Will’s family is living with and she is devastated to know what Will wants from his life, and more so because his family is supporting him with his sinful decision. She puts her heart in her work as a caretaker and tries every possible measure to change Will’s mind and make him realize that this is not the end of his story. There is and always will be a life beyond the Wheelchair. But does Will comply to this kind of life? Can Louisa change his mind? As the rendezvous of events pass along, Louisa falls in love with Will for the person he is. The dominance which once irritated her, now dawns on her as his right. But is her love enough or rather strong enough to stop the crime she is now an accomplice in? 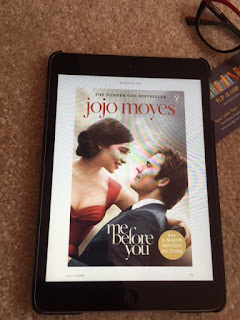 I said earlier that I looked at it as something more than a romantic novel, yes, because apart from showing a matured love angle, it also shows the restraints of a young man in a wheel chair who used to be quite the active and adventurous type before his accident. His irritant nature, sarcastic remarks revealing his stuck position and the change in attitude towards life all sound very reasonable for a normal person. In due course, the change in nature after Louisa walks in his life is also something pleasurable to read. It only shows how in life the correct people bring back the charm that you once thought you lost. However, the changes, Louisa, her love and the good times spent together cannot alter the man’s decision which he has already taken, of how he sees his life ahead. The love story is matured, and goes on to show how you can perfectly fall in love with a person who is at an imperfect stage of his life, and also how difficult it is to lose such a love, especially knowing nothing is in your hands to stop the massacre from happening.

The story is neatly framed, cleverly excusing the unnecessary details. The characters apart from the protagonists have been portrayed brilliantly. I have to give special credit to the way in which the camaraderie between Louisa and Will has been elaborated. She understands that more than being stuck in the chair, what bothers Will is the sympathy he attracts from people, and that is one thing we see her avoiding in the whole book. I call it a matured love story, because rather than dealing with mushiness it’s all about understanding between the two, things said with less words, and I think that qualifies as a grown-up love. In scenarios like these, it’s the perceptive nature of the two which brings out the best. I was almost choked when I reached the end, though I had anticipated it quite early in the book, given the portrayal of Will’s persona. The insight and the imagination of a person to go through something like what Will Trayner did made my heart heavy.

I would suggest this book to everyone; it is an eye opener to the fact that we live a beautiful life. Grabbing the opportunities which come by and sharing our life with our loved ones means a lot. Squeezing out the maximum from it should be the aim. We are not in the chair Will was in, it is our close-mindedness which makes us feel trapped in the same way. So, let go and live on.
- August 29, 2016