I was keen to read this one, as it is the author’s first and as a first he gained quite an enormous amount of praise for his writing and the book. And yes, what a first! I did find some intelligent writing in there!

The story is about two men, Arvind Acharya, a scientist at the Indian institute of technology and Research and Ayyan Mani, a common man who is a clerk from a dalit section and works for Arvind Acharya.  It has always bothered him how, the society is always in favor of Brahmins, and be it a workplace or a social community. It is always on his mind- how these Brahmins can be embarrassed, insulted or shown as downgraded people who are given so much undue importance on the basis of their caste though it should only be one’s skill and talent that must make a man progress the race called life, and therefore he and his pranks never stop, somehow giving him a momentary satisfaction. In one such prank, he goes way to ahead and involves his son Aditya, showcasing him as a genius with a fire to prove – what a sweeper’s grandson and a clerk’s son can achieve being from a lower section of the society. In the parallel world, Arvind Acharya is a much hated scientist at his workplace and is noted for his arrogance and a non-supporter of any random theory when it comes to physics and science; more often than not everything in his life boils down to his concepts revolving around science and physics. A group of scientists who have made Arvind a victim relating to his bad mouthed words and insult are in search of a moment to ruin his image and take revenge and they do find one. The plan works for them and Arvind loses his pride, position and stature in Indian Institute of Research center, when only one man comes to his rescue, Ayyan Mani. Why does Ayyan Mani help Arvind? Is there a personal agenda in doing so? Is Aditya really a genius that Ayyan claims him to be? How are Ayyan’s and Arvind’s life interwined? Has Ayyan really made peace with the Brahmin society? So many questions, but the book answers them all. The interesting thing to note is how these answers unfold to the reader. Manu Joseph does not give it to you outright, as a reader he makes you travel through slow paced plot, and every phase making sense and connecting to the link ahead. It is a very well framed story. 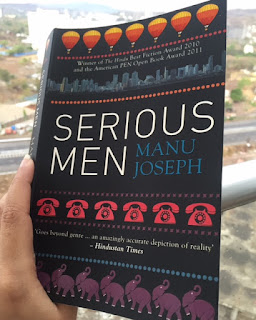 Now, why I say that it has some intelligent writing is because it covers all the aspects of a good book, a cleverly crafted work of humor, puns (not overloading it on the story), Ayyan’s emotions and grievance on cast, reservations, society of Brahmins and the politics which overrides all this. To add up, the love of a matured man Arvind Acharya, for the woman, for physics, his work, his theories and what he dreams to accomplish out of them have been shown aptly. And, moreover no character or no part of the protagonist’s life has been given undue importance; it is there because it needs to be there. It is a well balanced book, plot or story with no overdose of any particular element. The other character’s move in an out of the plot at correct times and nothing seems out of place.

The writer has done a very impressive job as his first. In a long time I read something which was mature, deftly crafted in terms of literature and covered some important societal aspects which we as citizens of this country usually ponder over. A thumbs up to this one, and eagerly waiting for the author’s next.
- July 28, 2016 1 comment: Links to this post

I am not a Romance frantic when it comes to reading genres, or so I may say- going with the classics is what I always believed in. Gone with the wind, Pride and Prejudice, works of Nicholas Sparks and the like have been my all time favorites. The only reason I picked up Eleanor and Park was because on the top it had a note from John Green, and that itched me to pick the book. Also, it was an experimental reading of what Young Adult genre sprinkled with adolescent romance is like. 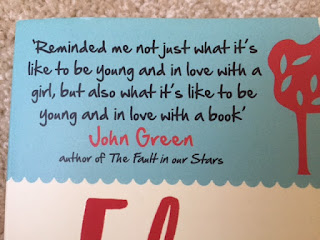 This love story starts very typically with the boy not liking the girl at first glance until they are friends and fall in love. Eleanor has been portrayed as a very ordinary chubby girl dressed weirdly which screams for attention and being the new girl in the school she falls prey to a lot of pranks and jokes. She knows the only best thing to do is to ignore them. In the school bus, she manages to take the seat besides Park, who is an Asian guy always reading with his headphones on. They break the silence between them by starting to talk about music and comics, and this starts the drift of liking-ness towards each other. The little mushy moments between Eleanor and Park will remind you of when you were young and in love. Holding hands for the first time, gazing at each other, secretly stealing glances, the whole blush story- everything is captured like it happens to two people falling in love for the first time.

Apart from the love notes going on between Eleanor and Park, a stark difference has also been shown in the family life of the two, somehow that intrigued me more. While Park’s is a very liberal family, Eleanor encounters day-to-day problems with her difficult step-dad, however the only thing that tries to give her strength each day to ignore it is Park’s love and support. With a terse environment prevailing in Eleanor’s family at all times, she feels that telling about Park to even her mom will complicate things as her step-dad is always on a roll to spare no moment of insulting or abusing Eleanor. A day comes when she decides to surpass all of this and runs away from her home. What makes her take this step, knowing she might lose Park? Is their love strong enough to survive the withers Eleanor’s eloping has caused? I really liked the part where Eleanor makes a run for her life; it shows her strong will and courage to take the correct step for her future. 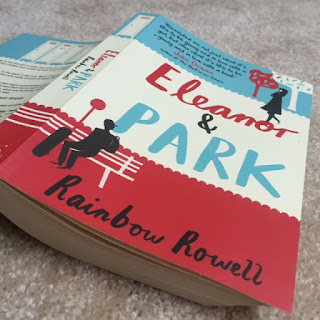 The high notes for me in the book were character description of both Eleanor and Park, the conversion of thoughts going on in their mind and finally the aspect which has been highlighted through this short love story that however imperfect you might be you will always find the perfect person in your life who will love you like you have everything and nothing to lose. Also, the support, guidance and environment provided by our parents in our teens, can really make or break one’s life; and like I said Eleanor’s and Park’s family define the difference finely in the book.

It’s a good pick for leisure reading, also, the author has gained numerous praises for her Young Adult books, one of them also being Fangirl. So, yes the author is worth a try.
- July 13, 2016 No comments: Links to this post