The House that BJ built- Anuja Chauhan
I am a great fan of her work, and I wouldn’t mind saying – she’s the most trending Rom-Com author right now. Her writing does not grow on you; it captures you immediately in the layers of humor which you find coming out of your mouth in the form of a chortle instantly when reading her, and without your realization.
‘The house that BJ built’ can be rightly called as a sequel of ‘Those pricey Thakur girls” and I have to admit it’s the smoothest sequel I have ever read, well connected incidents, return of the characters and the plot. It is very well framed. So, we see little Bonu Singh and Anjini’s step-son Samar as the prominent characters, ofcourse both have grown up to be creatively independent individuals. Bonu Singh or Bonita is a silver cladding curvy lady with long hair falling on her shoulders in layers, carrying enormous amount of self-worth, independently running her own business while being bighearted for the people she feels really close to. But, according to Samar she is a pugnacious brat. Samar, who is now a director with a handsome face and a charming butt scores over for being BJ’s favorite grand-child and the smart-bollywoody nephew to his aunts and of course for the movie he makes. And likewise, Bonu has some similar non-loving reasons for him to not be around her. But the skirmish romance building up between the two escapes no eye, in the house. 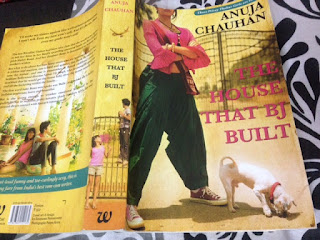 The plot starts from a crucial point which we come across several times while reading ‘Those pricey Thakur Girls’ - the A,B,C,D,E daughter’s hissa (share) when BJ sells his house. On his deathbed, he makes Samar promise that he will sell the house and each daughter will be given equal share after the sale to end all the squabbling in the family. So, all the adventure in this book is about the challenges the Thakur Girls, Samar and Bonita face to get the house sold. The Thakur Sister’s primary challenge is to convince Bonu Singh to sign the sale papers, which she won’t, because these cows (as referred by Bonu to her aunts) didn’t sign them when her mother, Binni was in dire need of money and asked them to sell.
“I will make my sisters squirm like well salted-earthworms, I won’t sell. Even my jutti won’t sell. And if die na, then even my gosht won’t sell!” - These are the words which keep ringing in her head whenever the thought of selling her share of the house comes to her mind. But, what happens, that she finds these words fading in her head and holding no impact over her now. Is it the love that Thakur sisters have showered on her, or the closeness she experiences with his so-called step-cousin Samar or probably the events –wretched tenants, shady builders, lies-  that bring BJ’s family close and together again.
To re-iterate, most of the characters are returning one’s from the first part, and very skillfully placed across the whole plot, nothing looks like a mis-fit. Yes, this is yet again a chick-lit novel, and probably it is the high point of the whole book, the discussions which take place between Thakur Sisters, reader is thrilled while reading it, breaking into fits of laughter. I am sure it is going to remind you of the discussions that happen in your living room. Everything in the book worked out for me, the fights, the emotional paradigm, the brewing up romance and the ecstatic wit; connecting perfectly.
A special mention of the writing style here- Anuja Chauhan’s writing changes with the character, if it is chachiji , she makes sure she makes the words sound phonetically Haryanvi-English, if it is Sateesh, then a South-Indian punch added to it. Some hilarious pronunciations for the lawyer character Mehendi Combover. The puns are colloquial, and blend with the situations naturally without any efforts.
I would definitely want to read more of Thakur Girls and ‘uber cool’ Anuja Chauhan!
- August 03, 2015