Mrs Funnybones - Twinkle Khanna
Many times I have found myself in a web of thoughts shooting puns of humor in my mind, like when I am talking to my in-laws or my husband, a friend or a neighborhood Aunty. More often than not, this lightens up the whole situations, though thankfully not sending me in peals of laughter at my own citric thoughts. And this is exactly what Twinkle Khanna has done in her first book, and very ably too, for she manages to induce giggles from these real life scenarios. 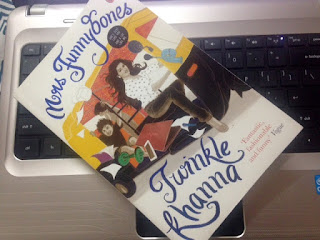 I have been a fan of her columns and follow it regularly, thus it is pretty obvious that I was to pick this book up for my review. And honestly, I think this is one of the books I thoroughly enjoyed reading and would recommend, not from a reviewer's eye, but from a reader's. So, I might probably keep this one short and leave the rest of it for you to discover.
Being a female itself dons one with numerous responsibilities and their repercussions along with maintaining a repute, specifically in an Indian society with multiple religious and family sagas clinging to our ears all the time. Mrs Funnybones is a respite to that. I say that because while you read her there’s a mutual sense of belongingness to the same clan- the female clan. And I would be amazed if you say you can’t relate to her!

The anecdotes are picked out from her personal life to a certain extent with some modifications, and so we see three prominent characters – the man of the house, the prodigal son and the baby- around whom the short stories revolve; also guest appearance by the mother. As much as they are satirical and humorous, they are like commentaries on the society and its trends, passing a strong message at the end. She talks about how being a full time Mom and handling a job and a house can’t be any easier, but the love in the eyes of your husband and the trust of your kids in you is what keeps you going with not even an iota of enthusiasm lacking. She delightfully criticizes the inclination of tying black threads around our wrists to ward off evil, the yellow stone in our index finger for career growth and, speaking in ‘whispers’, the unmentionable periods and the menstrual cycle, 'the monthly curse' as they call it. As light and funny the stories are, they clearly show the true picture of a female’s life.

While reading the book, I found myself in 60% of the scenarios and could imagine myself in the other 40%. Though I am not a full time mother now, but I can totally think what life would be after having kids, perhaps something similar to what Mrs Funnybones writes. A few favorite ones were- 'I refuse to celebrate this bloody Valentine’s Day nonsense', 'Karan Johar celebrates Karva Chauth', 'Zip your mouths for God’s sake', 'Not quite a feminist, so how did I reach Mars?' and more.

What is laudable is that the writer has put down these situations and thoughts to words with such dexterity that the wit is not lost from it-at all. The tongue-in-cheek punches will leave you in fits of laughter, such that 'the man of the house' will wonder – ‘what’s in that book?!’
I am going to recommend this one to everyone, especially the females because it’s like a silver lining that while dealing with unfavourable situations, the least you can do is squeeze humour from it. It helps a great deal.