I was determined to read this one, as his previous work on The Shiva trilogy had left me with lot of questions- not completely satisfied but very impressed by the tri-series. Hence, I wanted to read Amish again, pondering what his next could be, and when I saw the magnanimous cover page of ‘Scion of Ikshvaku’, I just hoped in my heart that it be worth the wait. No surprises then, that like those of his million reader fans, mine was also a pre-ordered copy, signed by the Author and had a bookmark too. (And I loved the bookmark!)

Just like in his previous series, Amish explores the idea of Gods as human beings before they achieved their stature. The Scion of Ikshavaku is the first book of Amish's new series - 'The Ram Chandra Series'. How eventful Lord Ram’s life was as a child and later, when he abided with law and righteousness, and dreamt of building a society based on moral, ethical and social values, how his courage and dharma towards his father makes his heart melt, and he accepts his son with open arms. Ram, who did not get the love of his father since his birth because he held his newly born son responsible for his only war defeat against the Lankan emperor Ravana, wins Ayodhya’s love once again by defeating him in Mithila. The threat though is still prevalent as Ravana, nursing a bruised ego, is bound to return. Meanwhile, Ram,Sita and Lakshman serve penance of fourteen years for using the daivi Astra- Asurastra, which is the law as per the Vayuputras, which technically could have been neglected for Ram, but the lord who has a law-abiding persona, could he have broken the rules? What example would it set for his people- Ayodhyans? 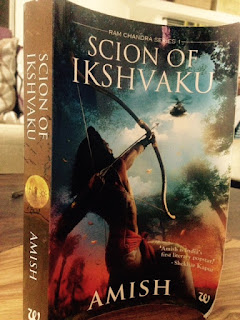 The writing of the characters is apt, however the character I enjoyed reading most was Lakshman, which obviously comes as a surprise since the limelight is on Ram. The witty punch lines given to Lakshman highlight his temperament perfectly. The calm presence and aura of Lord Ram have been maintained throughout; the first two pages describe Lord Ram positioned for taking an aim which is very impressive, but apart from the placate posture there is no other trait adding to his personality in the book. While reading The Immortals of Meluha, I was completely swept off my feet with the way the character of Shiva was carved in words. And I remember, the impact was too high to take it out of mind. It is one of the biggest reasons why The Immortals of Meluha won hearts. Hence, I felt the characterisation of the protagonist was a dipping point in this novel. Again, by writing about the character of Roshni, Manthra’s daughter, Amish has paid a tribute to India’s Nirbhaya. And the only hopeful thing here is, it costs criminals their life for their ruthless crime, and justice is settled, although the entire sequence looks out of place. The mis-fits like- the happenings with Roshni, sudden appearance of Guru Vishwamitra and taking Ram away; break the flow of a saga. Also, the book appears to be a prequel to the Shiva Trilogy, which is obvious as Meluha was based on Ram Rajya. But, apart from that, the appeal of the book is no different than the Shiva Trilogy. Reader feels that he’s back to reading Meluha, which seems inappropriate at some places. The freshness of starting a new series was missed.
The book gets interesting towards the end, when the fourteen years of penance are about to finish and something unexpectedly shocking occurs, surprisingly the entire 14 year “vanvas” has a swift wrap up in the book. The closure introduces the most sought after and favorite character- Hanuman, which is a delight because Ramayana is incomplete without him and the playful but loyal disciple as we know him; it’s going to be amusing to read him further. I really wish the book didn't have to end like that- it leaves you unsettled, wishing to read more of it and making you anxious wondering how part-2 will start, but then again, maybe that was the plan after all to keep the viewers hooked and eagerly await the next.
I am certainly waiting for the next in the series to be out soon, because I am looking out for various answers, and hopefully the one’s I listed as mis-fits have a proper explanation in the second part. One prime reason to be reading Amish is also that, he deftly writes his genre. And, after The Shiva triology, the next best chronicle to pen down would have been none better than a script based on Ramayana. I want to enjoy the Part-II, like I relished reading- The Immortals of Meluha and The Secret of the Nagas- the best duo from the triology.
- July 02, 2015