Writing this blog post becomes difficult this time, as I write about my most favorite author and the most awaited book of the year. A lot of nostalgia moments attached to this one, I started my blog with my first book review post of – 'To kill a mockingbird', and after a year I am on the same standpoint again.

Ever since it was in news, that Harper Lee’s next is titled- 'Go Set a Watchman', I was inquisitive and ran the horses of my mind - what could it possibly mean? In fact, this is the question that would arise in the mind of anyone who hears about it; just like the title-‘To Kill a Mockingbird’- draws you instantly and is apt.

So, the book starts with Jean Louise coming home to Maycomb for her vacation, and in her mind she holds a lot of questions and expects a lot of mayhem to be heard from her father. The book sees Scout’s character as the same, determinant, woman of words, independence of thoughts, only rather it is the amplified version of what we read in “To Kill a Mockingbird”. However, she has made peace with her aunt Alexandra on some matters because she considers highly of her, leaving her house and staying with Atticus to take care of him. Atticus has now grown old, and to his support is Henry Clinton, Scout’s childhood friend and now beau. Henry works with Atticus and handles a lot more for him, now that age has taken a toll over him and with Jem’s demise, Henry is like family. Some characters have been repeated from the previous part, so it’s not difficult to connect with them in the flow of the content.

What you might have really liked in “To kill a mockingbird” you might not find it here, and it might prove to be a disappointment for one of our beloved characters- Atticus Finch - is observed in racial ties and found supporting the “color” which he always stood against. The main story unfolds when Jean Louise discovers her Father from the courtroom balcony, in a meeting with know-who’s of Maycomb  in a citizens council; which speaks of Negro’s holding a backseat in Maycomb. The presence of Atticus is rather displeasing to her and Henry is his accomplice. The whole describing of Jean Louise feelings, and her traumatic discovery has been put down really well, it takes you back to “To kill a Mockingbird”; remembering the teachings of Atticus to Scout and Jem. And for the particular instance you really connect to Scout, and all that Atticus Finch ever read to her making her sit on her lap, which all of it now holds no value after the stab of discovery.

Dr. Finch or Uncle Jack as we know him finally comes to the rescue of Jean Louise. The paraphrase where he makes her understand that her father is not a saint but a human is aptly drafted. Also, that now she should move on from Saint Atticus, and put him in a position where humans should be. And as a father, what he taught Scout and Jem, he always stood by it and is rather happy today to see that her daughter stands against him on the same values and virtues which she was bred in. That is when Uncle Jack makes her realize that it is her Conscience which made her swear her dad and that she could put her voice before him, stand up to him without any second thoughts; which finally describes the title of the book.
‘Every man’s island, Jean Louise, every man’s watchman, is his conscience’
-          Go Set a Watchman


Harper Lee’s narration and words never disappoint you and so it holds true in this case. But somehow it does not bring back the same cult, refreshing, cheerful flavor of 'To kill a Mockingbird', probably because it had more of seeing Jem, Scout and Dill grow up with Boo Radley, and their adventures. Also, Atticus was all through the book, whether it was the court room or teaching his children words of wisdom, he really made a greater impact. Reading something against one of the iconic parent in history does feel depressing. Also, I really wanted to know what happened to Boo Radley, no mention of it was dismay.

With the end of this book, I think it is an end of an era; of classic writing. 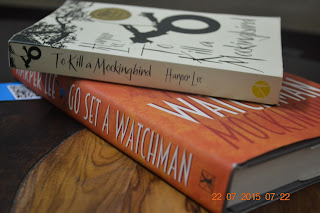