A couple of days back, after finishing Adultery, I got super busy with my new project at office. The entire day I was either on my toes or behind my computer digging into some training program, so by the end of the day I really missed something- reading. I was not even reading myself to sleep, and so I decided to pick up a short and interesting book, The Animal Farm (A fairy story). And it served its purpose.


Have you ever imagined animals talking? What would a pig say? How does a sheep react? Are donkeys really that dumb? Well, this little story about a farm will take your mind on an imagination trip, making you picture the scenes as you read. It’s like following a fun-routine. So there’s a farm loaded with animals- pigs, dogs, cat, cows, donkey, horses and more- and like any other farm, there is a master, Mr. Jones. The story revolves around a group of pigs who lead a revolt on Manor farm and chase Mr. Jones away because he is an evil master who just gives them sufficient food and water to survive. They say - ‘Four legs good, two legs bad’! 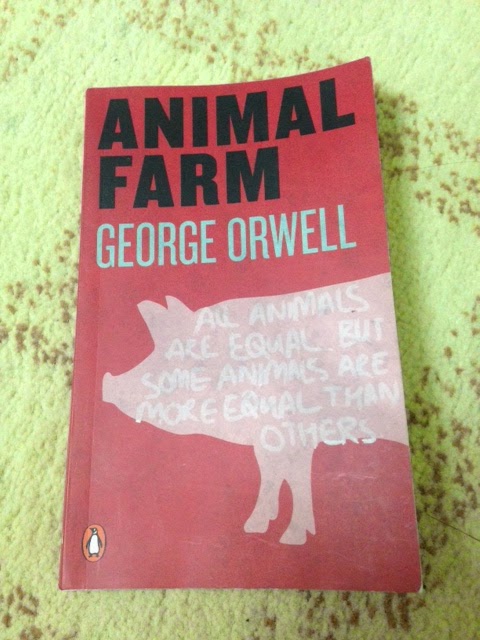 Napoleon and Snowball decide to take the responsibility of managing the farm. They are different, so are their ideas, and so are their methods to manage the rule on farm. While Snowball is a good morally upright pig, Napoleon is a dictator, narcissist and authoritative. His team runs on corrupt political power, the victims being the farm animals. The allegory here is that the story is based on the famous Russian Revolution of 1917. The characters fit really well in this drama and Orwell’s simplistic writing makes it even more impactful to measure not only the small story of the animal farm but gives us a bigger picture, like the use of political power to mould the victims by diplomatically telling them that this is for their benefit.

Orwell has painted the plot really well, keeping each animal-character in mind, and it is enthralling to see pigs talk like diplomats and leaders. The sequences of events fall wonderfully that make Snowball the culprit in the animal’s eyes. Squealer was a delight, little cute one with sharp mind games, playing his moves well. Whenever there is a change on the animal farm commanded by Napoleon, Squealer the pig would reach out to the masses and justify the same, telling the animals- It’s for your good and then adding overtly sentimental dialogues about how difficult it is to be a leader. Not even once did I feel that I am reading an animal-oriented book, the characters as animals, give us glimpses of human traits at various points in the scene- The commanding Napoleon, The animal’s guy Snowball, The sharp-minded Squealer, and the meek animals left with no choice but to agree to the superior and most of all- whatever the original nature of a man, it intends to change with power and greed.


It would have been fun to see some more dialogues though. It was pure narration, but a narration so straight that there was no beating around the bush with extra information and no dwelling of the plot, rather simply creative. I say creative, because visualizing a whole lot of animals and forming up a story from history is an innovative mind.


I would recommend this book for it will surely give you a playful reading experience, keeping you connected with the message George Orwell intends to pass via Animal Farm. (It surely is a fairy story)!!