A Farewell to Arms- Ernest Hemingway

There’s a little story about what poked me to pick up this book to read and review. So here it goes: When I saw Silver Linings Playbook, I really loved Pat’s character (Bradley Cooper) and his first reaction to a leaflet he reads is fierce. That really got stuck in my head and I wondered which book it was. I loved the movie and I definitely wanted to read what Pat was reading. A Farewell to Arms has been on my reading list since then. 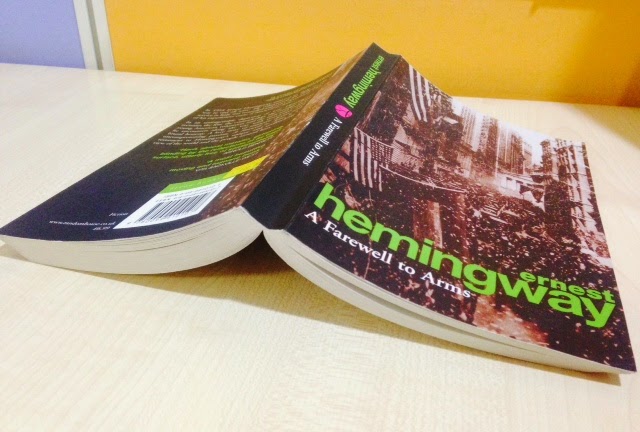 When you flip through the initial pages, you discover that the story is set in the backdrop of World War 1- the circumstances, the armies, worried viewpoint of army men, frightened civilians, and some inquisitive audience always wanting to be educated with the news at the front. Moving ahead, you will discover that it is not a war saga totally, rather it is a love affair set in those turbulent times. The novel is divided into five books, or rather parts. The first book introduces Frederic Henry, serving as a lieutenant in the ambulance corps of the Italian Army and Catherine Barkley, a British nurse. They realize their liking for each other and fall in love, but the lieutenant gets injured at the front and is sent to the hospital in Milan, Italy. Fate re-unites them again in Milan, with Catherine being sent to the same hospital in which Henry is recovering. They spend good time discovering their relationship and falling more in love each day and soon it is time for Frederic to return to the front. The characters have been defined as opposites- while the protagonist; Fred comes out as a bold war-repellant character, displaying his brutal honesty, Catherine is portrayed as a simple (sometimes funny with her dialects) lady passionate for her love. But, their conversations do not remind you of their peculiar personality traits; it rather convinces you of a deep and fervent relationship they share. But, does all go well, bearing in mind Fred comes from an army background in times of war? What happens upon his return to base? Does Fred escape from war unscathed? Is the couple able to have a peaceful reunion? What is that unacceptable moment which leaves Henry alone, stooping and walking in the rain? What is his pain? What is his loss?

I will not run around the plot this time, not the slightest idea for you! And moreover, rather than the plot, it is Hemingway’s writing- bringing a humane touch when speaking about war, describing the scenario in a very gallant manner, understated at a lot of times- which is the highlight of the book. He plays around mostly with dialogues and conversations, but not forgetting the sharp eyed details. It is not a very appealing writing for the masses who are reading Hemingway as their first. You might feel lost, but it is only after fourth section that you start relating to the characters, the design and the melancholy it brings ahead. It sinks in and leaves you with a heavy heart.

A farewell to arms comes out of the disgust to end all wars, of the life-after-war anticipation and from Ernest Hemingway’s own experiences, when he was in ambulance service in 1918. It is listed as a popular classic from the times of First World War.
It’s moving!