I remember reading this book in shifts, swinging between my office work and the ebook, and not even once did I lose a grip on the story, the plot and the humour.  It gave me the same allured feeling when I resumed reading from where I left. This cover’s going to hook you real good! 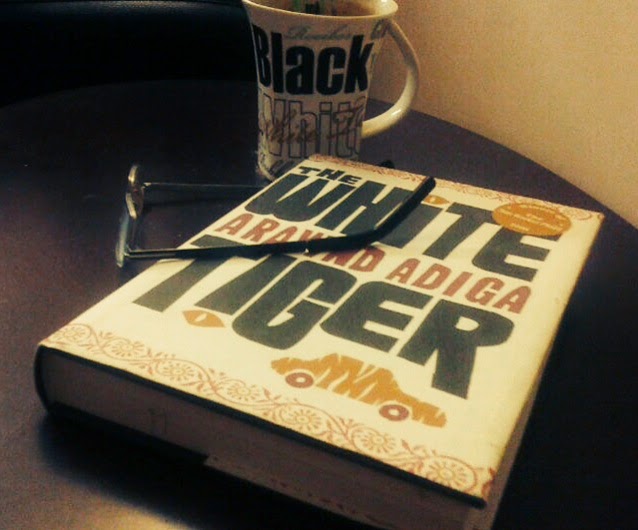 ‘The White Tiger’ kicks off with the protagonist, Balram Halwai telling his success story in the letters he  writes to Mr. Premiere- his story of becoming an entrepreneur, the highs and lows, the efforts and the paths he took to come out of ‘the darkness’-the impoverished areas of rural India. It all starts from a village named Lakshmangarh,where at
first he is a nameless chap studying in the village school and feeling good about it, and moves forward with him leaving the school because his granny doesn’t want him to study anymore, becoming a tea vendor, aiming to become a “uniformed” professional and persuading his brother Kishan to allow him to learn driving, so he could become a driver in the city. Finally, when he’s a trained and learned driver, he starts working for a rich family settled in Dhanbad who are based out of his own village, Lakshmangarh. Learning the life of servitude and moving to Delhi with his master unfolds life’s lessons for him. Climbing the social ladder, time and again, he finds himself being a dutiful servant and succumbing to situations, which lull him to conclude that he is destined to be a servant all his life, being loyal to his Master, New York returned Ashok Sharma, whose throat is eventually, and in a shocking twist slit by him one fine night, a deed for which he holds no guilt. Why does he respect and kill his master at the same time? Why is there no guilt? Why does he still bask in his own success glory? Because, it is all about breaking free from the social shackles of a powerful man, something that this cover puts across very well.

The character of Balram Halwai is the heart and soul of this novel. In his yester years he is referred as ‘The White Tiger’- the rare creature which comes around in generations, called so because he impresses the school inspector by his intelligence. His background is portrayed in a difficult typical village society, where at the time of elections the dark India finds itself in a position where democracy is just a word and poor is quarry in the hands of the potent, even after the globalisation and downfall of imperialism. The power that rich have over poor is a frequent topic in Halwai’s letters. Balram, however, aims for freedom and breaking out of the ‘rooster coop’, a metaphor used to illustrate the poor majority being ruled by the small dominant minorities, and hence, the name White tiger does complete justice, as it symbolizes individualism and freedom, one amongst many and millions, who escapes the rooster coop, to establish himself as a successful entrepreneur, but with blood on his hands.

As serious as the plot sounds, I found it to be a very satirical-humour narration, with jibe annotations on every character the protagonist introduces and meets. The played sarcasm is towards one’s-own-country, calling it the best in a murky manner. Although simple in his writing Arvind Adiga adroitly highlights ‘the darkness’ and descripts raw India, captures individualism, social caste, immoral corruption, liberty and wraps it up in layers of naive-humour, making it a hearty, conversational and glued-up read-on-the-go.